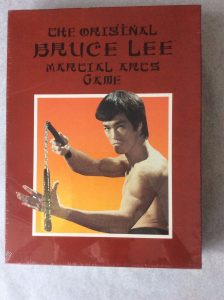 Back in the early 1980’s Sandford Tuey created the board game “The Original Bruce Lee Martial Arts Game”. With the blessing of the Bruce Lee estate Sandford publish 5000 copies of this game through his IIE Game Corporation. While rare, one can often find a copy on eBay or occasionally, at a game store.

This past spring Sandford Tuey passed away and I thought it would be nice to memorialize my old friend and fellow game designer, by submitting his Bruce Lee game to the BCIT Industry Sponsored Student Projects program.

Fortunately, a group of students selected this project last September and quickly set about converting the board game into an online version.

Led by Ruize Ma, Tong Yang and Yipan Wu quickly began developing the game using Unity. While the BCIT students started learning how to code for a Unity build I reached out to the Bruce Lee Estate in an effort to secure permission to use the original title. Turns out that the estate transferred control of the name and likeness to a corporation that didn’t even respond to me enquiry. Oh well. 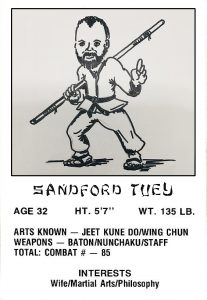 Not wanting to slow down the project we elected to remove the references to Bruce Lee and his likeness from the build. It was decided that we would simply rename the game “The Sandford Tuey Mixed Martial Arts Game”. Catchy, no? As for the Bruce Lee opponent card, well…that became the “Sandford Tuey” card. Mr. Tuey retained all of Mr Lee’s stats because I figured that in his mind, Sandford, like most men, saw a little Bruce in himself.

In the development of this computerized version of the game we tried to stick to all of the original rules but, we did have to make a few alterations. Also, the students elected to create a new board for their build and this has been changed quite a bit from the original. Lastly, there are also quite a few graphical changes that had been made.

However, the computerized version plays pretty close to the original rules and for those who remember how to play this game, some of these changes are listed below:

*Tokens move in a clockwise direction whereas in the boardgame version tokens can move in either direction.
*There are more Hospital squares on the board due to the unidirectional travel.
*All players have their Dexterity, Knowledge and Strength preset to 50 points each.
*Only 4 players can play this version and those 4 players are either human or computer.
*When a weapon is used, said weapon is removed from usage unless players acquire multiples of that weapon.

I will add a link to the full set of rules to this page and the game interface shortly.

The students went a little overboard in adding my company logo to this build. I am not laying any claim to the Sandford Tuey Mixed Martial Arts Game. The students used my logo to fill up empty spaces on their board and they had to add it somewhere seeing as Pixelific Games was their industry sponsor.

The BCIT students did an excellent job on this build given the short amount of time they had. They did capture the essence of the game but it is no way complete. Temporary images were used and there are some small issues that would have been addressed had there been enough time. Where this game goes from here is up to Sandford’s family. I will host this program for a while, give his family and friends a chance to try it and reflect upon their relationships with Sandford. I know I will.

Try The Game (Do not maximize the game screen as some of the elements become skewed. Should that happen press the Esc Key to return the screen to normal)